This chapter offers an overview of the data concerning the Palaeoenvironment at Samos.

During the Upper Neogene Mytilinii basin, which is the basin affecting Heraion, is formed (1), 151). Late Miocene contributes to the oldest lacustrine portion as well as bituminous limestones, marl stones, dolostones and porcelanites. Palaeoenvironmental conditions on the plateau are categorized in three successive periods: (a) Waters of varying depth (shallow to deeper) in a saline lake, (b) saline lakes, dry lake landscapes with often earthquake events and deposition of brecciated sediments, and ( c ) possible partition of the lake to two parts, with the south-eastern part by Pythagorion forming a deeper-water saline lake. An alternative scenario to period ( c ) would be the different topography of the sediments’ deposition. North-west we could have a deposition on the margin of the lace while south-east at the centre of the basin. The location within the basin is exposed to higher salinities and alkalinities leading to a precipitation of the saline minerals (2), 159-160).

Owen at al. provide a detailed stratigraphy of Mytilini basin (3), 155, fig. 1) according to which following Late Miocene sequences have been deposited: Limestones of ca.200 m thickness, clastic rocks of ca. 170 m thickness, 50 m of diatomaceous rocks, 200 m of dolostones and finally tuff.

According to Bailey (4), 8) around 18000 before present earth experienced the most recent glacial period where a great amount of water has been “locked” by the ice sheets located to the north and south hemisphere extended to the center. In that case Western coast of Greece (at Epirus) was quite different from what we know today, since the eustatic sea level was ca.100 m lower. At the northeaster of Greece (at south Argolida) a similar phenomenon took place according to Van Andel and Tjeerd (5), 390). The sea level gradually increases as we move toward the inter-glacial period we currently live. Samos would be heavily affected by the eustatic sea level changes, forming a unit with Kos, Fournoi (as from the major islands), the shores of Turkey as well as several smaller Greek island of the Aegean sea (Figure X, A. Androvitsanea). Submerged landscapes as studied by Flemming (6), 1031) corroborate this theory. 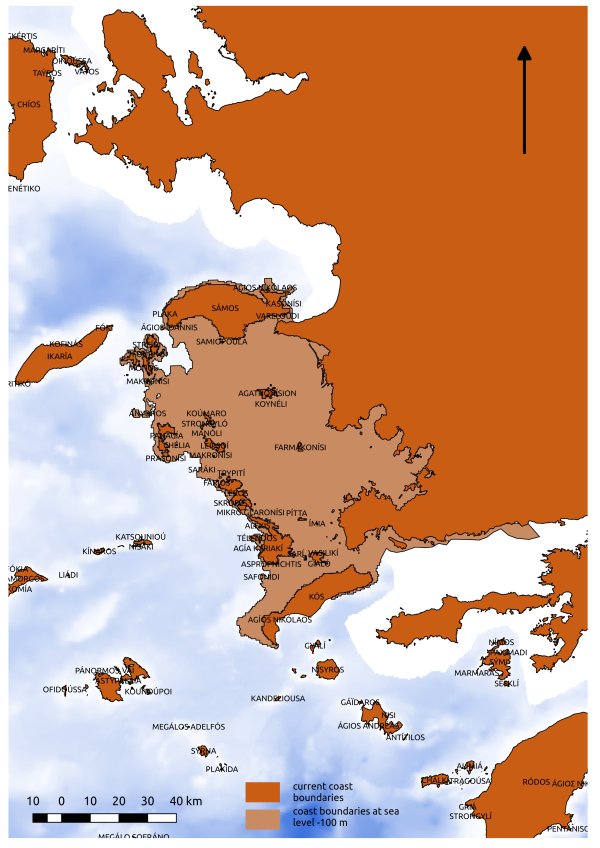 Samos island experienced isostatic sea level changes as well during the Quaternary and most specifically in the Holocene (starting 11.700 years before present) (7), 44). The topography of the sea bed indicate the existence of an over 1000 m marine basins at the north-west of Samos, while the slope indicates a major normal fault in charge of the north-west and west coast. Southern and western coast have a more gentle sea bed topology with depths not exceeding 200 m (8), 42).

At the south-eastern part of Samos the coastal subsidence occurring during the last few thousand years is implied through the discovery of submerged landscapes (9), 44). On the other hand during the Holocene north-western coast have experienced uplifts which reach the height of ca. 2.5 m (10), 46). Uplifts are linked to earthquake evens dated at 973-773 BC (1.1-1.5 m uplift) and 1867-1601 BC (2.3-2.5 m uplift) (11), 52). Mourzas and Stavropoulos (12), 234) estimate a 20 cm uplift for the southern coast during the Holocene. Further on, Stiros et al. present another approach concerning the dating of earthquake phenomena, on the basis of a constant average uplift rate, which would date the earthquakes responsible for the uplift at 2000-1100 years before present (13), 52).

Mourtzas and Kolaitē get even deeper to this topic describing the uplift of the southern part of Samos island as a back and forth uplift of 20 cm around an east to west axis (14), 6). The eastern part has been submerged 50 cm. They continue distinguishing three major sea level changes that haven’t been dated. The older on is spotted a depth of 7.85-9.90 m below today's sea level. The next one which corresponds to a swamp plateau for Heraion is at a depth of 4.00-5.60 m. The last and most recent one is at a depth of 1.60-3.10 m, again connected to a swamp environment (15), 76-77). They conclude that Heraion belongs to a system which is constantly changing, often flooding, with great variation on torrent course. Additionally, main characteristic of the site is the formation of dams, lagoons and swamps (16), 74).

Quaternary uplifts appear to be more dramatic with an estimation of 20 m at the north-western part of Samos. Assuming that 1 m of uplift is implemented in 1500 years, we end up at approx. 30000 years before present during the late Pleistocene (17), 53).

A detailed study of the gradation of Tigani coast has been performed by Mpleta et al. resulting to the thesis that the shore consists of sandy gravel while offshore we find sand of a diameter bigger than -1 Ø (cisa test sieves) (18), 73). Tigani coast has an inclination of 5-6 grads while offshore it is limited to 1-3 gr. A basic feature is the rocky anomaly of the surface starting at a distance of 35 – 65 m from today's shoreline at a depth of 2 m, corresponding to paleo-shorelines during the last thousands of years (19), 73).

Heraion coast, which is part of the bigger Tigani coast, consists as well of sandy gravel, while at the shoreline we can spot graveled sand. Coastal width reaches 15 m which an inclination of 5.2% while offshore inclinations decreases to 1.4% (22), 75). Finally, the study concludes that Tigani coast has undertaken soil corrosion leading to the disappearance of fine-grained material while the coast has been 15-28 m submerged (23), 77).

Further on, the team of Kirdis and Papadopoulos performed a speleological survey along the island, at Mytilini basin and Ampelos mountain as well. This investigation delivered interesting results in regard to the groundwater and former river banks (24), 149-150). At a distance of ca. 1.8 km southwest of Nerotrivias spring it is located a two stored cave (No.1, “Unnamed I”, A.S.M. 7105), where the upper level includes a lot of stalactites, stalagmites and deposition of sediments, forming a former river bank. The lower level is a more recent river bed which still functions in case of flooding, while the floor is completely covers with river sediments. 5-6 meters lower there is a lake that possible communicates with Nerotrivias spring. This river flows on the contact of limestone and the above lying schist .

Back to the palaeoclimatic conditions, the cultural collapse of 4200 years before present (25), S3) is described as a possible mega-drought taking place not only at the Northern Hemisphere but affecting broadly the Mediterranean terrain as well. It is followed by a change in solar irradiance or a series of major volcanic eruptions.

Wiener studies the collapse of civilizations in the Bronze Age trying to correlate it with climate change events during the Neolithic. It is accepted that 4200 years cal BP a major collapse took place, while at ca. 3200 years cal BP (meaning 1200-1000 BC) a second one followed concerning the area of Samos island (eastern Mediterranean, as well as Anatolia) (26), S1). Hughes at al. argue that a northward shift if the circumpolar jet stream has taken place followed by the predominant transfer of moisture from the Atlantic to northern Europe. This would lead to the conductance of descending dry air on the eastern Mediterranean (27), 72).

It is argued that in ca. 2300 BC air carrying a lot of moisture coming from the North Atlantic, seasonally expected to reach the Mediterranean leading to winter precipitation have been altered. In ca. 2050 BC the precipitation has reached pre-aridification levels (28),S2-S3). A Northern Hemisphere-wide event is considered responsible for this phenomenon leading to movement of the Greenland Ice Sheet or the Arctic sea ice, variation of ocean and solar variations’ imposed changes to North Atlantic. Another suggested event is linked to solar irradiance and/or a series of volcanic eruptions. Since these events are not attested via oxygen stable isotopes studies 180/160 ice coring of Greenland, it is proposed that these phenomena had a mid-northern-latitude boundary (29), S3). Additionally, recent studies relate an ice sheet-fracture event in North Atlantic to climate changes affecting Italy taking place 4200 year before present (30), S3).

During the period 2300-2000 BC coastal sites in the eastern Mediterranean receive more rain than inland sites, while sites that are located north of the 36o latitude (Samos is at 37.7548o) receive more rain compared to southern locations (31), S3). Near East empires collapse during this period, although there have been cases “societies responded to the abrupt climate change with political collapse, regional abandonment, nomadization, and habitat-tracking to sustainable agricultural regions”. A similar collapse is attested at ca.2200 BC in Cyprus, where while there used to be a similar material cultural along the island as a possible effect of a local globalization of the Eastern Mediterranean, this communication is suddenly interrupted along with this culture (32), S11).

At Heraion of Samos we have no longer the chief’s settlement, while it seems that a communal celebration is taking place and communication to the east is constant. Same goes for Kos island, south of Samos, where there have been abandoned settlements or sites at ca. 2300-2000 BC (33), S7).

Several scholars mentioned by Wiener argue that one or two stages of collapse, at ca.1200 and ca.1120-1080 BC have been dominated by drought, dryness or/and earthquakes which lead to migration and therefore to cultural system’s collapse (34), S1).

Further on, between 300-600 AD Huns and Avars have migrated from Asia to western Roman Empire due to sever drought, while this phenomenon is repeated during the period 950-1072 AD. This period included dry periods interrupted by years of rainfall, while unusually cold weather in the north work against the endurance of crops (35), S1).

Modern studies reflect a variable and periodic drought episodes on Samos during the last 500 years (37), 30) as well as a general reduction of precipitation during the last 100 years.

In respect to flooding incidents, Stamatakos (38), 75) concludes based to his hydrological model that they form a natural diachronic phenomenon, based on physical processes being also encouraged by anthropogenic actions.

Except where otherwise noted, content on this wiki is licensed under the following license: CC Attribution-Noncommercial 4.0 International